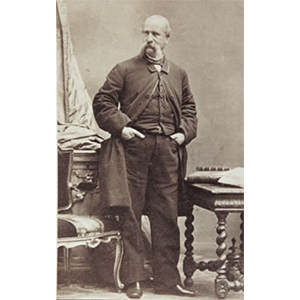 Cerdà was born in Catalonia in 1815. He trained as a civil engineer at the Escuela de Ingenieros de Caminos, Canales y Puertos, in Madrid. He joined the Corps of Engineers and lived in various cities in Spain before settling in Barcelona in 1848. After the death of his brothers, Cerdà inherited the family fortune, and left the civil service. He became interested in politics and the study of urban planning.
When the government of the time finally gave in to public pressure and allowed Barcelona’s city walls to be torn down, he realized the need to plan the city’s expansion so that the new extension would become an efficient and livable place, unlike the congested, epidemic-prone old town within the walls. When he failed to find suitable reference works, he undertook the task of writing one from scratch while designing what he called the Ensanche or Eixample, borrowing a few technological ideas from his contemporaries to create a unique, thoroughly modern integrated concept that was carefully considered rather than whimsically designed.
He continued to create projects and improve existing designs throughout his lifetime, as well as to develop his theories taking on larger planning scopes (at the regional planning level), until the very end. In the process, he lost all his family’s inheritance and he died in 1876 a heavily indebted near-pauper, never having been paid for his chief masterpiece, the design of Barcelona’s Eixample.