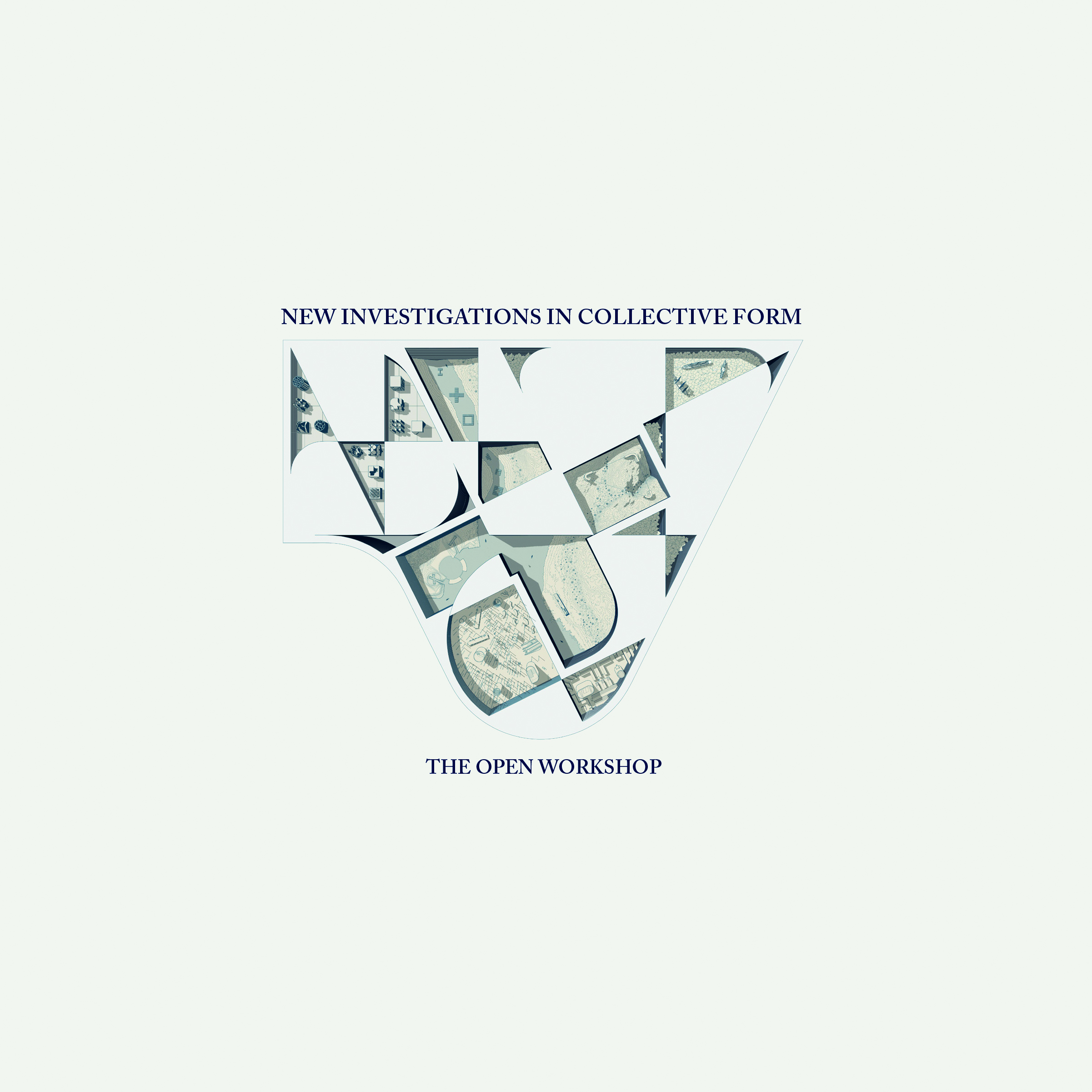 New Investigations in Collective Form presents a group of design experiments by the design-research office The Open Workshop, that test how architecture can empower the diverse voices that make up the public realm and the environments in which they exist. Today, society continues to face urban challenges—from economic inequality to a progressively fragile natural environment—that, in order to be addressed, require us to come together in a moment when what we collectively value is increasingly difficult to locate. Organized into five themes for producing collectivity—Frameworks, Articulated Surfaces, the Living Archive, Re-Wiring States, and Commoning—the projects straddle the fine line between the individual and collective, informal and formal, choice and control, impermanent and permanent.

In 1964, Fumihiko Maki published his seminal text, Investigations in Collective Form, which he framed as the beginning of a vast inquiry on collective form. In the text, a young Maki grapples with the role of urban design and the urban designer, who is “charged with giving form” to the city. The emerging challenges Maki witnessed for the urban designer resided in the series of recent changes to the urban realm, including the “coexistence and conflict of amazingly heterogeneous institutions and individuals; unprecedented rapid and extensive transformations in physical structure of society; rapid communications methods; and technological progress and its impacts upon regional cultures”. What Maki so eloquently pointed out was the need for the designer to now think simultaneously about dynamic cycles, time, and transformations, which he termed “the master program” and as well as how form (or in Maki’s terms, the “master form”) responded to these temporal scenarios. This shift demanded by Maki in the role of the architect was indeed a profound one, as the architect’s role throughout history had been to determine lines that ordered the world. We could say that the majority of architecture and urban design of the twentieth century aimed to tame the contradictory, heterogeneous, and contingent urban environment, both physically as well as socio-politically. In the past two centuries, as cities have rapidly expanded into vast urban territories that are organized through the negotiation of politics, economics, and cultural values, the ability to determine such lines of order has become progressively more complex and suspect. Instead of controlling and assimilating the individual and the natural environments they inhabit, the design-research of The Open Workshop is focused on understanding how design can embrace the diversity and indeterminacy of the urban realm.

New Investigations in Collective Form expands upon Maki’s three approaches to collective form—composition form, the megastructure, and group form. The Open Workshop’s design-research projects examine how the human and environmental subject and their individual, transforming, ephemeral, and often contradictory characteristics continuously recompose a permanent work. These approaches include Living Archives, Rewiring States, Commoning, Articulated Surfaces, and Frameworks. Living Archives and Rewiring States are time-based approaches; Commoning is an organizational and programmatic technique; while Articulated Surfaces and Frameworks are form-based. Living Archives insert the contemporary subject into the making of the archive, redefining this space as an evolving cultural project that connects us to a longer lineage of what we have collectively inherited and will pass down. Rewiring States inserts architectural form in precise relationship to various ‘states’—time, temperature, materiality, form—of processes—logistical, industrial, and infrastructural—to rewire the these systems for new socio-political actors. Commoning examines the how to share and manage resources to enable user-managed governance. Articulated Surfaces leverage the flexibility of the generic surface and test how the time-based management of impermanent processes can more fully choreograph difference, expression, identity, and scale. Frameworks are legible geometric structures that are activated by transformations from indeterminate human and environmental factors. In each approach, design is not lost but rather re-centered on orchestrating the negotiation between indeterminate subjects and determined form. It is the richness of the dynamic subject evolving through time that is foregrounded but only understood through the collective framework of architecture.

MCM – Milan, Capital of the Modern

Spatial Practice in a Polar Territory